Gastvortrag Matt Sheedy, PhD:
"Islamophobia in the Age of Trump: From Free Speech to White Supremacy" 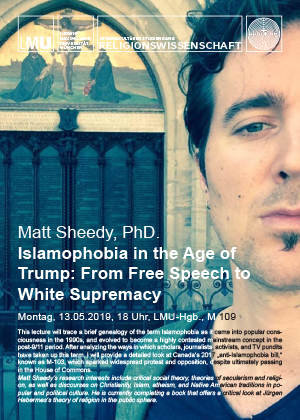 This lecture will trace a brief genealogy of the term Islamophobia as it came into popular consciousness in the 1990s, and evolved to become a highly contested mainstream concept in the post-9/11 period. After analyzing the ways in which scholars, journalists, activists, and TV pundits have taken up this term, I will provide a detailed look at Canada‘s 2017 „anti-Islamophobia bill,“ known as M-103, which sparked widespread protest and opposition, despite ultimately passing in the House of Commons.

Matt Sheedy‘s research interests include critical social theory, theories of secularism and religion, as well as discourses on Christianity, Islam, atheism, and Native American traditions in popular and political culture. He is currently completing a book that offers a critical look at Jürgen Habermas‘s theory of religion in the public sphere.